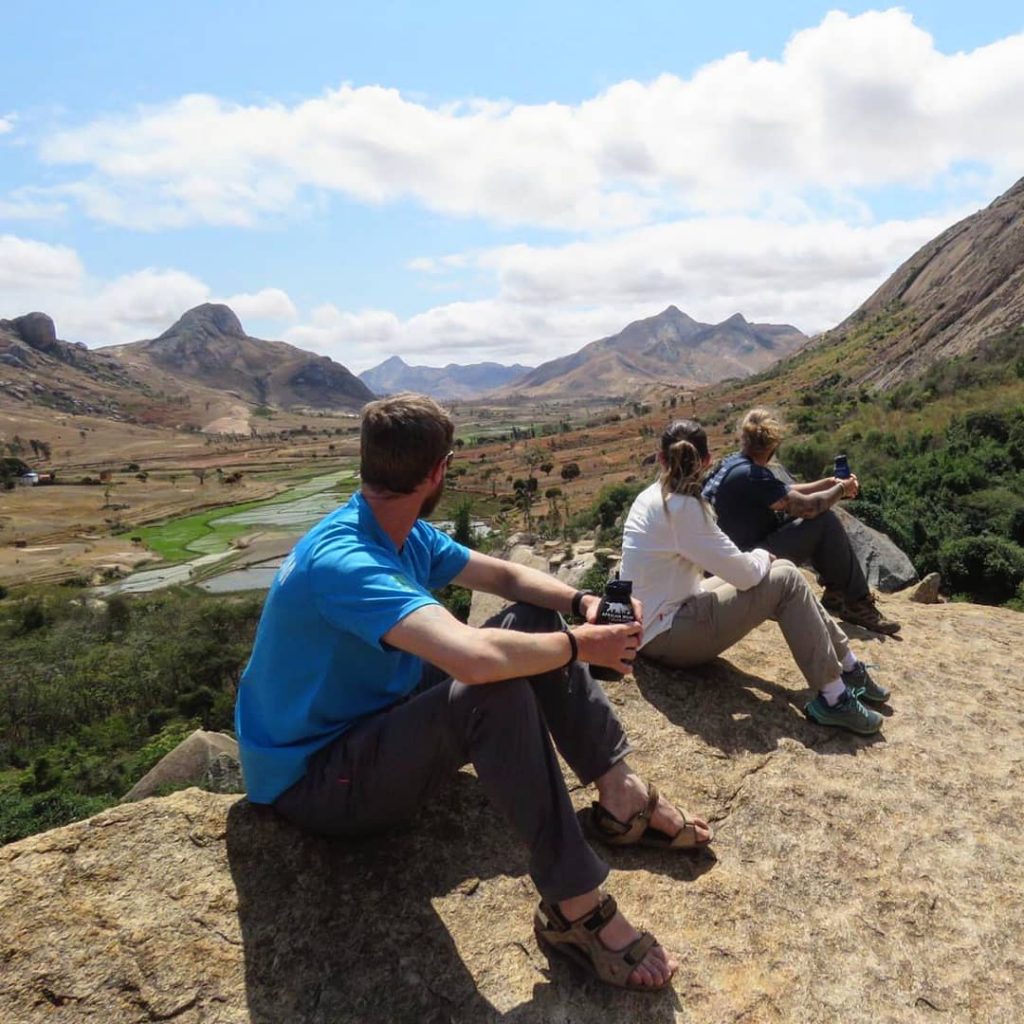 Expedition Leader, Adventurer and Water-to-Go ambassador Chaz Powell along with Ecologist Emilie Gorse, and Videographer Justin True have become the first people in known history to walk the length of Madagascar’s longest river, The Mangoky; whilst walking the width of the country from east to west.

The team began their journey on Madagascar’s east coast in the coastal town of Manakara. They then spent 29 days walking for 800km across the country, whilst following the Mangoky River from source to sea, until eventually reaching the coastal town of Morombe on the country’s western coast. The expedition which hoped to raise awareness for wildlife and habitat loss throughout the country was a huge test for the team as they battled against extreme temperatures, threats from armed bandits and risking coming face to face with huge man eating crocodile’s.

“It’s by far been one of the toughest expeditions I’ve ever taken on. A journey that has taken us through the wildest of ever changing and jaw dropping landscapes. An expedition that’s seen us trekking through jungles, across mountain ranges, wading through crocodile infested waters whilst negotiating the constant security issues and threats of armed bandits. The extreme heat and long distances over difficult terrain has taken its toll on all of us. We’ve lost a crazy amount of weight and we’re all mentally and physically exhausted. But once again it’s been a journey I’ll never forget and an experience that will stay with me forever!”

Chaz and the team’s Story

On 31st August 2019, Powell, ecologist Emilie Gorse, filmmaker Justin True and photographer Nina Weismeyer set off on their 780km trek from the small city of Manakara on the east coast. For the first week, they slogged 170km through the country’s interior, along a jungle rail line and into the central highlands toward the headwaters of the Mangoky, Madagascar’s longest river.

The Mangoky marks Powell’s third source-to-sea trek. Earlier in 2019, he completed a 1,120km expedition along the Gambia River. In 2016-17, he hiked 3,000km through six countries down the Zambezi. But finding a definitive source of the Mangoky River proved difficult despite his experience. Before the main channel, the river is divided into a few separate rivers. “All of these have many different tributaries and channels coming off them,” Powell explained. Local information was contradictory but seemed to point to the Matsiatra as the dominant tributary. Therefore, the team hiked to the source of the Matsiatra, near the small village of Sahalavo.

The group lost a member midway through and the team suffered “mentally and physically, especially with tiredness, hunger and injuries.” They were forced to divert from the river early and often due to the threat of bandits. Madagascar has a serious problem with malaso (armed bandits) in the interior. Approximately a third of the country is known as the red zone, an area outside of law enforcement control. “People were genuinely scared for our safety, and this left us extremely nervous,” Powell said.

Their first diversion occurred at the village of Isaka. Here, heavy bandit activity made it too dangerous to continue. They hired security and elected to walk south across the mountains to a lower river channel, the vowel-happy Mananantanana. 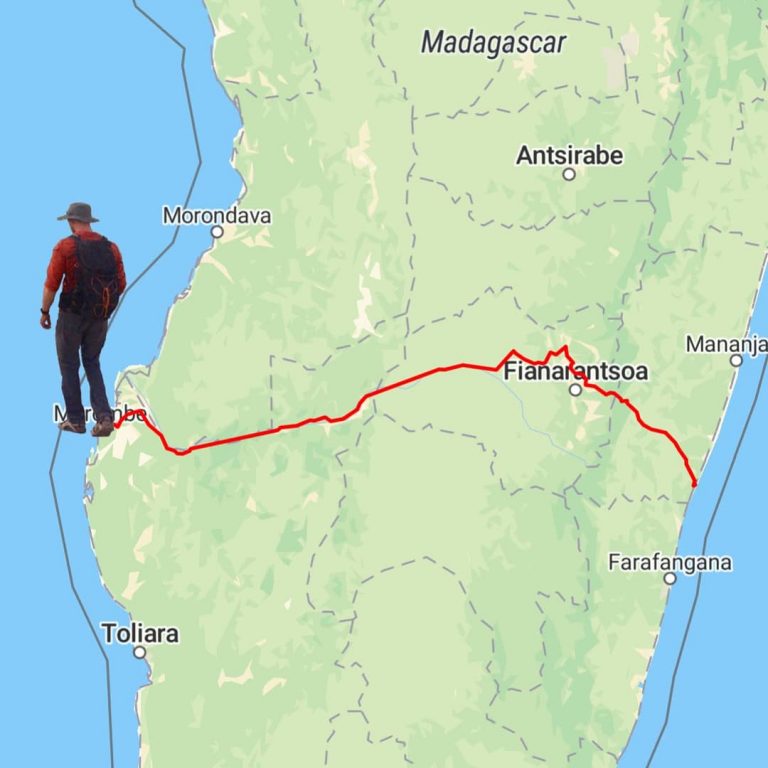 Later, in another small village, they encountered a group of heavily armed men. Their security guards were deferential to the armed group, and Powell was keen to move on quickly. Although they weren’t followed, they later discovered that these were the infamous malaso. They were told that the only reason they weren’t targeted was that members of that gang had previously been arrested for attacking tourists and were reluctant to take the risk again.

Fortunately, this was their only run-in with bandits. They followed the Mananatanana to the main Mangoky River channel and continued down to the sea at Morombe, on Madagascar’s west coast.

The 800km trek took 29 days in total as Chaz and his team walked across Madagascar following the Mangoky River from source to sea, averaging around 27km per day. It is an incredible achievement and an expedition that will live long in the memory of the team.

After 29 days we have successfully walked for 800km across Madagascar from east to west whilst following the Mangoky River from source to sea!

Water-to-Go on another Chaz Powell Expedition 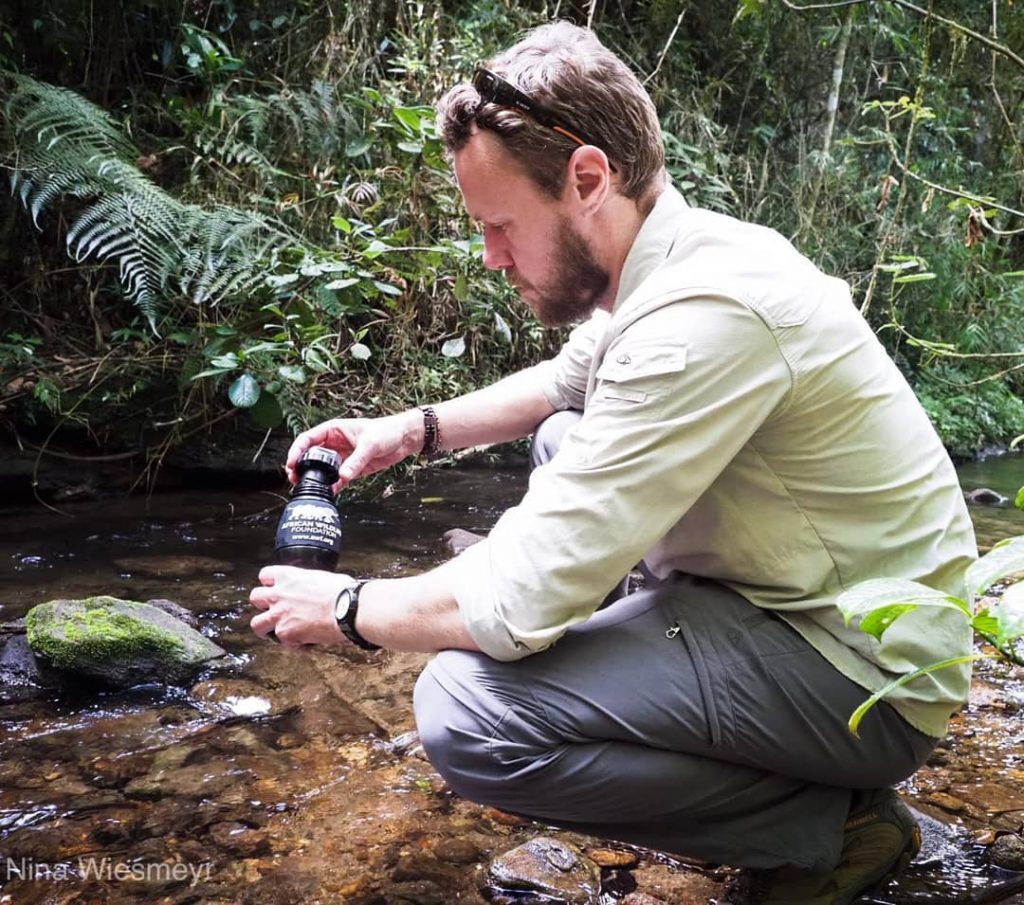 One of the most important bits of equipment that Chaz used for this expedition (and all his previous Africa expeditions) was his trusted Water-to-Go bottle. The unique 3-in-1 filter technology allowed him to fill up from any freshwater source along the route, and access safe clean drinking water. This was essential to stay healthy and hydrated along the walk in the blistering heat.

“The Water-to-Go bottles were crucial in helping us survive in the remote areas we ventured through during our trek across Madagascar’s wild interior. Without them we certainly wouldn’t have been able to gain access to safe drinking water and most certainly would have struggled to complete our mission without them.”

As with his Zambezi and Gambia treks, the main motivation behind Powell’s journeys by foot along Africa’s wildest rivers has been to raise funds and awareness for the loss of wildlife and wild lands across Africa. Chaz has been working with both Water-to-Go and the African Wildlife Foundation, who in turn have been working in partnership to raise money for their projects in Africa. If you would like to support this fantastic cause, please click here. Many animals and habitats are under threat in Africa and this was only too true in Madagascar according to Chaz  – “Most of the areas we walked through contained nothing. The protected reserves are the only places you can see wildlife thrive, and these areas are getting smaller. Around 90% of the people across Madagascar rely on charcoal to cook with, so most of the forests have been stripped down completely.”

This was another fantastic milestone to add The Wildest Journey and has only fuelled Chaz with inspiration for his next adventure. To keep up to date with everything Chaz is up to, make sure you follow him on social media.